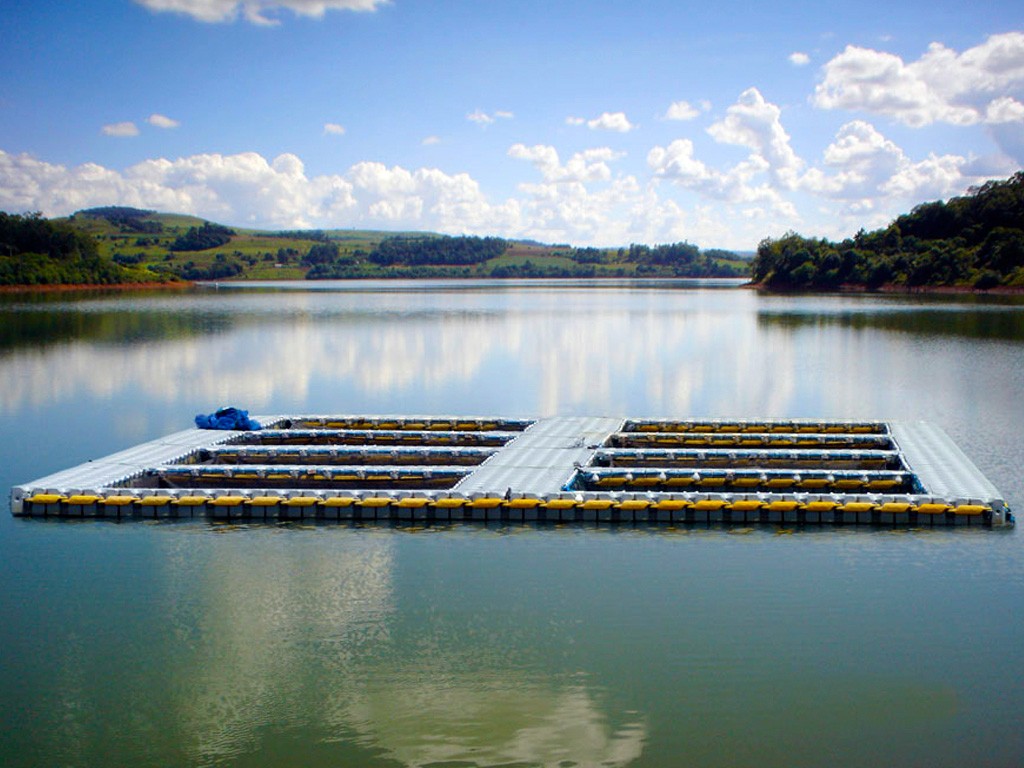 Ancient Aztecs probably never thought they were creating a technology that could be used thousands of years later; they were just looking for a way to grow food with the resources that were available to them.  Chinampas are rafts of food crops that float on the surface of a body of water.  Aztec gardeners dug up decomposing organic matter from the bottom of Lake Tenochtitlan and added it to the gardens to fertilize the crops.  Read more about the process and the history in “Aztec Chinampas of Central America.”

EzGro Garden has developed a way to utilize this ancient technology in a modern way.  Floating blocks, similar to those found under docks and marinas, are used to support a grow bed or an EzGro vertical garden on top of a body of water.  EzGro vertical towers can be used to grow a variety of plants vertically, or a horizontal, soil-based grow bed may be used to grow larger crops.

Growing plants this way has lots of benefits.  Plants can be grown in a soil-based or soil-less medium in the modern-day Chinampas.  The medium provides a place for bacteria and other soil biology to thrive, which helps to filter the water, trap particles, and break down the debris.  The water that filters through the growing medium returns to the body of water, completely clean!  This may mean that fish will thrive in a body of water that was previously unable to support life.  If fish are introduced, they will eat mosquitoes and mosquito larvae.  Of course, the debris in the pond will provide much needed nutrition for the crops.

The modern-day Chinampas can be used on top of lakes, ponds, or any other fresh body of water.  One application of this garden will be cattle ponds, the ponds that cattle ranchers use to provide drinking water for their cattle.  These ponds are typically stagnant pools of murky water with no life, and are often teeming with mosquitoes.  This environment cannot support fish, and it seems less than appetizing for most forms of life.  The addition of a floating garden will be a highly effective tool for cleaning the water in these ponds by removing debris and adding oxygen back to the water.  Oxygen is an important element to support fish and other aquatic life in any ecosystem.  As an added bonus, covering some of the surface area of a body of water will reduce the rate of evaporation, which will help to conserve water.

There are two options for the modern-day Chinampas.  The first is the EzGro Garden vertical garden system, which are Agroponic systems that utilize aquaculture for plant nutrition.  You can read more about these terms in the Foundation of Hydroponics article.  The second option is to implement an EzGro floating grow bed, which will provide plenty of soil for long term, deeper rooted and tall plants, such as corn, wheat, onions, potatoes, okra excreta.  EzGro floating grow beds are partially open on the bottom to wick water up into the soil.  These soil-based grow beds can be completely organic, as all the plant nutrition comes from the muck at the bottom of the pond.  This muck is used in the grow bed and added into the soil, and the plant nutrition comes from this decomposing organic matter.  Both types form a self-sustaining ecosystem.

Ancient Aztecs relied on Mother Nature to break down the detritus at the bottom of Lake Tenochtitlan.  This lake has always been crystal clear, and scientists wondered why.  In 1976, a team of researchers visited the lake to figure out why the water was always so clear.  A particular type of bacteria was deposited in the lake from a volcanic eruption that happened thousands of years earlier.  The bacterium was brought back to Austin, Texas where it was studied and recreated.  This bacterium has the unique capability to break down all types of organic matter into food-grade fertilizer.  The bacterium in powdered form is introduced with the system to greatly speed up the decomposition process and clean the water.

These modern-day Chinampas can solve a few crucial problems the world faces today.  By utilizing the space on the surface of a body of water, we can conserve space on the land.  A large percentage of the world’s land is currently being used for agriculture.  If the modern-day Chinampas can be implemented globally, some of that land may even be returned to its original state, perhaps a field of wildflowers or even a forest to filter CO2 out of the air.  The restored land would provide crucial habitat space for endangered wildlife.  By growing on top of water without soil, soil pests, disease, and other insect pests will be reduced, which will lower the need for pesticides.  Additionally, harvesting is much simpler when it can be done at eye-level from a vertical tower garden.  Finally, the amount of water that is used in agriculture in its current form is astounding.  The modern-day Chinampas will greatly reduce the water used to produce some of the world’s food crops.  The system will use water that is already on the site where the garden is located, so water will not need to be pumped from miles away.

The modern-day Chinampas combines an ancient farming practice with what we now know about biology and crop growing technology to create a solution that can be used all over the world.