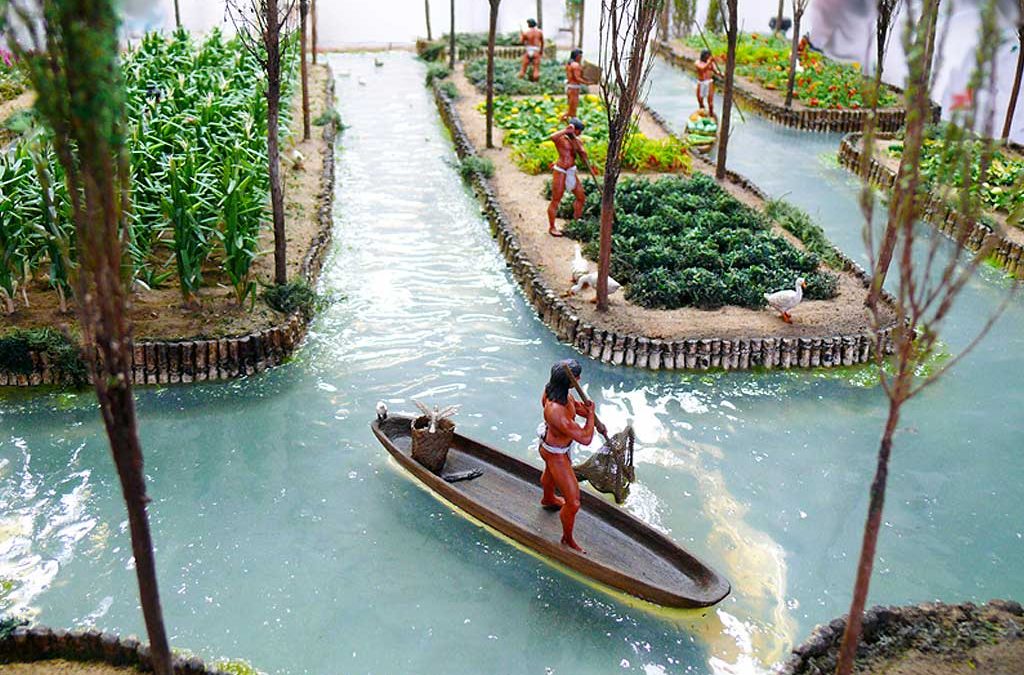 An example of hydroponic principles that were being used successfully is that of the Aztecs of Central America.  A nomadic tribe, they were driven onto the marshy shore of Lake Tenochtitlan,   located in the great central valley of what is now Mexico.  Roughly treated by their more powerful neighbors, denied any arable land, the Aztecs survived by exercising remarkable powers of invention.  Since they had no land on which to grow crops, they determined to manufacture it from the materials at hand.

In what must have been a long process of trial and error, they learned how to build rafts of rushes and reeds, lashing the stalks together with tough roots.  Then they dredged up soil from the shallow bottom of the lake, piling it on the rafts.  Because the soil came from the bottom, it was rich in a variety of organic debris, decomposing material that released large amounts of nutrients.  These rafts, called  “chinampas” had vegetables, flowers, and even trees planted on them.  The roots of these plants, pushing down towards a source of water, would grow through the floor of the raft and down into the water.

These rafts, which never sank, were sometimes joined together to form floating islands as much as two hundred feet long.  Some chinampas even had a hut for a resident gardener.  On market days, the gardener might pole the raft close to a market place, picking and handing over vegetables or flowers as shoppers purchased them.

By force of arms, the Aztecs defeated and conquered the peoples who had once oppressed them.  Despite the great size their empire finally assumed, they never abandoned the site on the lake.  Their once crude village became a huge, magnificent city and the rafts, invented in a gamble to stave off poverty, proliferated to keep peace with demands of the capital city of central Mexico.

The sight of these islands astonished the conquering Spaniards.  Indeed, the spectacle of an entire grove of trees seemingly suspended on the water must have been perplexing, even frightening.  William Orescott, the historian who chronicled the destruction of the Aztec empire by the Spaniards, described the chinampas as “wandering islands of verdure teeming with flowers and vegetables and moving like rafts over the water.”  Chinampas continued in use on the lake well into the nineteenth century, though in greatly diminished numbers.

Ancient Aztecs probably never thought they were creating a technology that could be used thousands of years later; based on what we have learned from them we have created new Modern-Day Chinampas.

Beautifully made by the team at Te Mahi, the diorama shows just how lush, colorful, and dynamic the chinampas were.