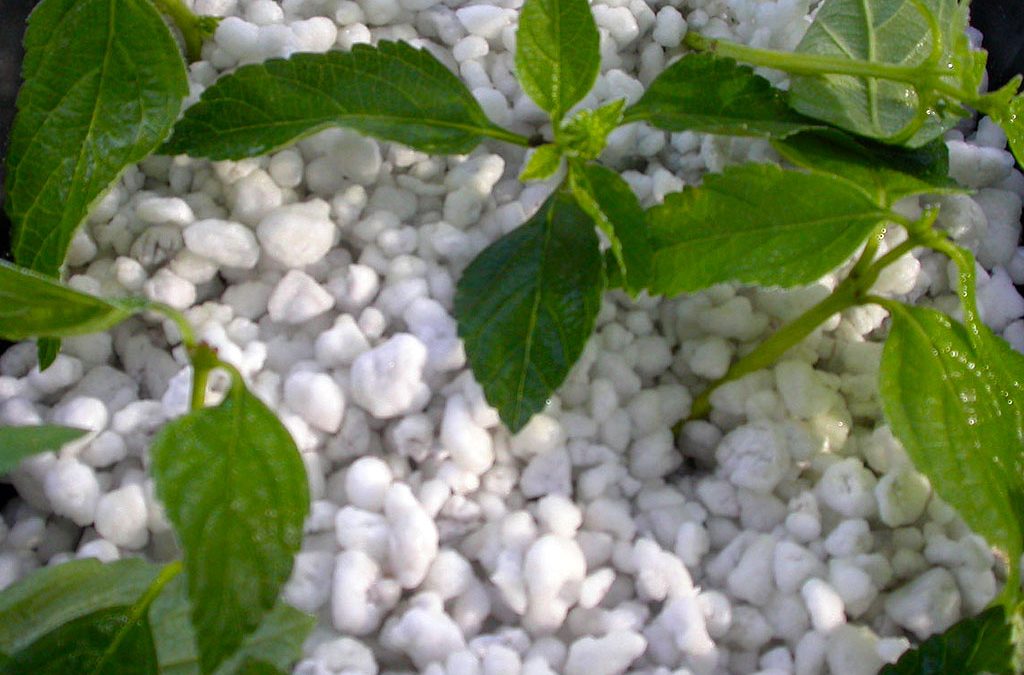 Perlite is an ideal hydroponic media because it is so light in weight. Perlite is an amorphous volcanic glass that has relatively high water content, typically formed by the hydration of obsidian. It occurs naturally and has the unusual property of greatly expanding when heated sufficiently.  When used in growing systems, it is noted for its excellent aeration capability.

Perlite is an excellent filter aid. It is used extensively in Australia and New Zealand as an alternative to diatomaceous earth. The popularity of Perlite usage in this application is growing considerably worldwide.

The multi-purpose volcanic glass was discovered in the early 17th century, and people began calling it “perlite” in 1822.  However, it was not until 1929 that researchers in Japan began studying the material.  The United States became interested in perlite’s potential shortly after this, during the 1930’s.  In 1938 in Arizona, L. Lee Boyer discovered an innovative way to expand the material so that it could be converted from a raw resource to a construction material.  Boyer applied for a patent on the expanding process.  The advancement of the perlite industry was put on pause during World War II, but work resumed in the late 1940’s.  Perlite is now mined all over the world, and the United States is currently the largest consumer.

Perlite is a naturally occurring volcanic glass that expands significantly when it is heated to very high temperatures, roughly 1600 degrees Fahrenheit.  When heated, the water that was trapped inside the material escapes, which is why it expands so much- up to twenty times its size.

The lightweight nature of perlite makes it ideal for numerous applications.  It may be used alone or along with other inert media for growing plants in hydroponic systems.  When mixed with soil, it provides excellent drainage for potted plants.  In addition, perlite is used as a component of plasters and concrete because it weighs so little.  It is also often used as part of insulation and ceiling tiles.

Perlite is an extremely lightweight material that, when used as a growing media, adds much needed air space between the individual pieces of the substrate.  This allows plant roots plenty of room to grow, without any chance of the media being compacted.

Perlite is used in a variety of ways in horticulture.  It can be used on its own, or it may be blended with other types of media, such as coconut coir or vermiculite, for use in hydroponic systems. In addition, it is often added to potting mixes to improve the media’s airflow.  This is crucial to root health; plant roots need oxygen just as much as we do.

Perlite for horticulture is manufactured in different sizes, and the sizes are indicated to the consumer by their measurement in millimeters.  For example, 1 mm is very fine, and 4 mm perlite is coarse.  There are different grades in between as well; size 3 is considered a medium grade.  Ez Gro has size 5 perlite made specifically for our customers because it provides the best airflow.  You’ll never have to worry about it floating out of your system because it’s just too coarse for that to happen.

Perlite is very easy to use and is usually sold in bags.

When using perlite for gardening, it is very important to rinse it before use.  Though everyone is different, the dust at the bottom of the bag may irritate some people’s throats when it is dry, so a mask may be worn to prevent inhalation.  Note that this only occurs when the media is very dry; this will only happen when it comes directly out of the bag.  After it is rinsed there will be no problem.

Pour the perlite into a clean wheelbarrow or bucket and cover the aggregate with good quality water.  Allow the perlite to sit in the water for at least fifteen minutes, which is enough time for any excess particles to settle.  Usually the bottom of the bucket will be coated in perlite dust after it soaks in water for a period of time.  Simply scoop perlite from the top, drain, and then it is ready for use!  Combine with coconut coir, in roughly a 50-50 ratio for an ideal hydroponic media.  Mix with potting soil and use for planting potted or garden plants.  Perlite may be used alone or combined with other media to grow all kinds of plants.