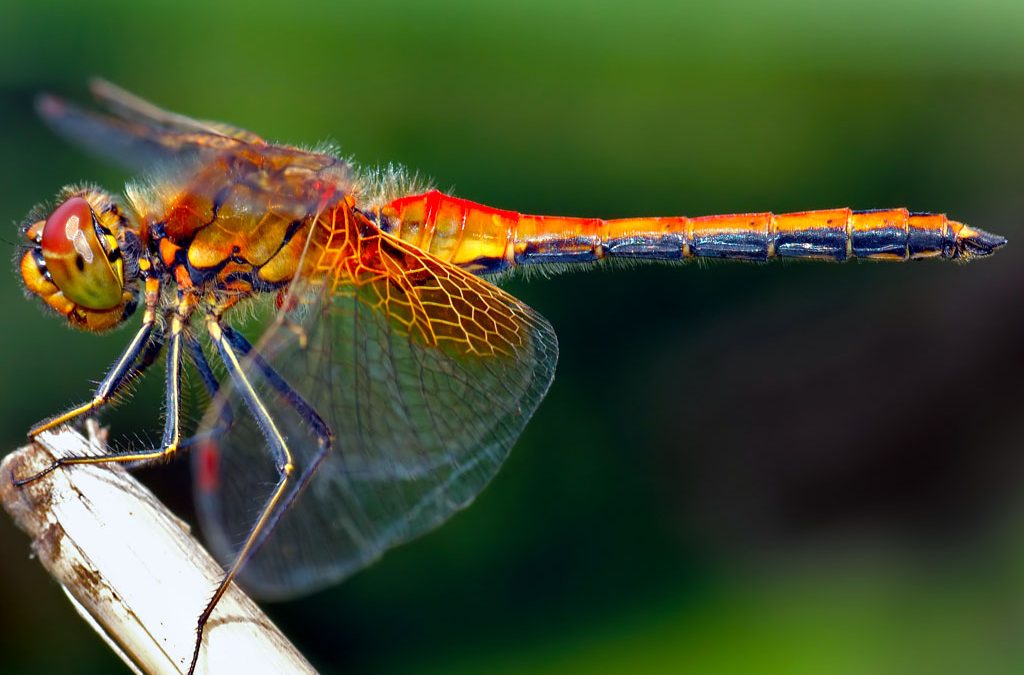 Dragonflies are graceful, brightly colored predatory insects with four wings and a long body.  Large ancestors of dragonflies, those with a three-foot wingspan, were on this planet longer than we can imagine.  Fossil records show that dragonflies have been here since before dinosaurs appeared!

They fly over open areas of water, fields, and wetlands with ease.  They enjoy hunting many different types of flying insects including gnats, moths, and midges.  Adult dragonflies are adapted to be excellent hunters.  They create a trap in their hairy legs to catch unsuspecting prey.  The prey is then eaten head first by a powerful jaw that chomps right through its body.  The dragonfly’s keen eyesight and fast flight are two more important adaptations.  Most of the dragonfly’s head is covered in eyes, and they can reach speeds up to 35 miles per hour!

The adult Dragonfly has a unique mating ritual.  Young dragonflies leave the water until they are ready to mate.  Both the male and female travel to a wetland area to find each other.  Their curved bodies connect in a circle shape, and they do not stop flying!  After this interesting ritual, the female lays her eggs on the surface of the water, on plant material, or on mud at the water’s edge.  Eggs usually hatch in about ten days, though this can vary depending on the species and environmental conditions. Young dragonflies live underwater for several years where they feast on small insects, tadpoles and even small fish.  Dragonfly young are referred to as “larvae,” “immatures” or “nymphs,” depending on who you ask.  Like most animals in the animal kingdom, they need to watch out for predators.  Young dragonflies are hunted by various species of frogs and fish, but are adapted to escape by forcefully shooting water out the end of their abdomen that quickly propels them away from harm.

Dragonfly nymphs may molt between ten to twenty times over the course of three months to ten years.  When conditions are right, the nymph crawls up onto something to give it support and begins to swallow air in order to expand its body.  At this point, the outer skin will split and the dragonfly will pull itself out of its outer skin to reveal its wings.  As the wings unfold and the dragonfly dries, it takes a much needed rest.  The dragonfly soars away from the water and is a very strong flier.  They can fly for many miles, and some types even migrate.  They return to wetland areas when they are ready to mate.  As dragonflies leave their home wetland and move to others, they can populate many different bodies of water.  This can be attributed to their success as a species.

Many dragonflies live for six months, but some larger species can live for six to seven years.  As adults, they do still have some predators they need to look out for.  Spiders trap dragonflies in their webs, and birds may catch them while in flight.  They can also be cannibalistic, with larger species eating smaller ones.  Their strong flight can help them escape, and their bright colors may deter other animals by making them think they could be poisonous.

The damselfly is a relative of the dragonfly, as they are both classified in the same scientific order, Odonata.  It makes sense that the two may be confused.  There are a few marked differences that a trained eye can easily identify.  First, their flight pattern is very different.  Damselflies flutter whereas dragonflies have a more powerful, direct flight.  Secondly, a dragonfly’s eyes are closer together than a damselfly’s, and their abdomen is shorter than a damselfly’s as well.  Dragonflies are large and have a heavy body.  When not in flight, they usually perch on something and spread their wings open and flat

Dragonflies are an important predatory insect that can help control mosquito populations in your yard.  You may have already seen them on your property, which benefits you and helps maintain their populations.  If you haven’t seen any yet, it is easy enough to entice them to visiting your yard. They can be drawn to your yard by creating an appealing habitat for them.  Small, clear ponds with some aquatic plants and sunlight will help make your yard a dragonfly haven.  When thinking on a larger scale, conservation of wetlands in your region and beyond will help keep the ecosystem healthy by providing habitat for dragonflies and other crucial species.