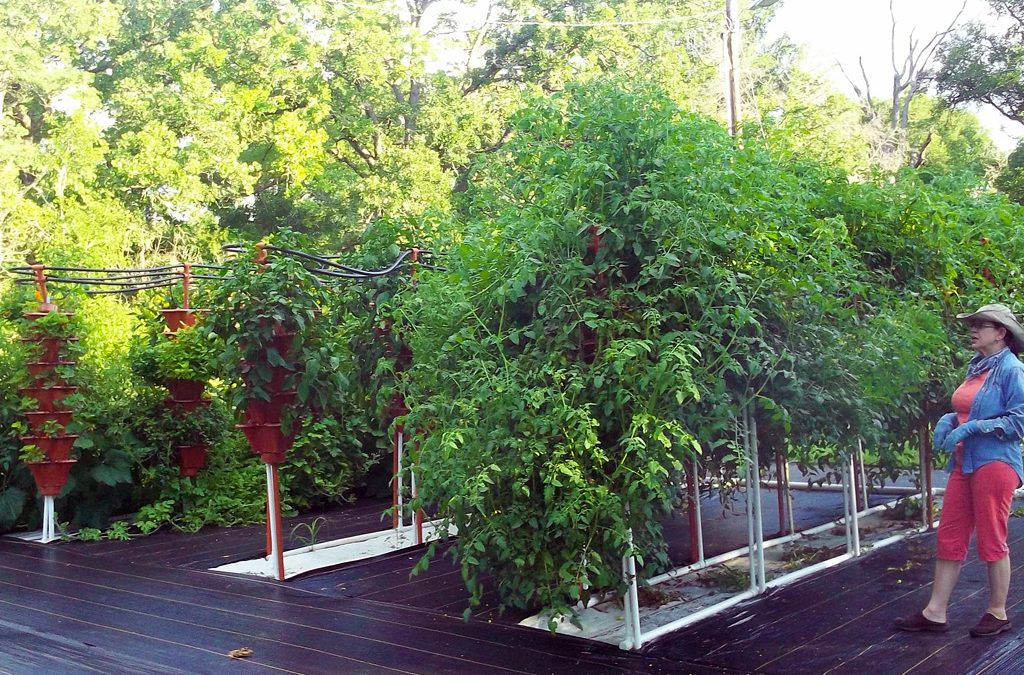 Summer in Central Texas is once again in full swing, and it is flaunting its lush growth potential beautifully on Larry and Brenda Johnson’s rural property in their EzGro Backyard Garden, Midsummer Night Meadows. Larry Johnson, the founder and developer of the EzGro High Density Vertical Gardening System, constructed this 30- tower system in 2010, and it has been producing heartily ever since. His wife Brenda takes care of the up-keep and harvest, and of course transforms the bountiful produce into delicious fresh meals as well as preserved goods.

During the first year of its production, Midsummer Night Meadows was dedicated to strawberries, and the few original towers produced plentifully during that season, but the following year the Johnsons decided to expand the system to its current size and plant a full and varied vegetable garden. As their property fronts a main road in the area, the Johnsons are constantly approached by curious neighbors when they are picking produce or doing yard work, which has been a good opportunity for them to connect with new members of the community, and several neighbors have purchased their own systems after learning about the advantages that the hydroponic vertical garden system offers.

The summer of 2014 finds Midsummer Night Meadows prolific once again-it’s nearly impossible to see the actual towers and pots beneath the sprawling vines and foliage of the vegetables. The tomatoes are ripening by the dozen each day and this season’s cucumber harvest surpassed 100 pounds recently. The largest watermelons are already weighing in at over 5 pounds and a variety of sweet bell peppers accent the garden with their varied bright colors. Herbs abound here too- one can smell the pungent freshness of the spearmint, peppermint and chocolate mint from 10 feet away!

It has been a busy season for the Johnsons, as they are installing another strawberry-only garden beside the existing system, and have built a 320 square foot greenhouse behind it to extend the growing season right through the winter and ensure a constant supply of fresh lettuces and herbs. The greenhouse will also house an aquaponic coi pond, which Larry builds using up-cycled used hot tubs. The system will also house catfish and will be connected to a planter so that the plant roots can act as a filtration system for the pond.

It has been exciting, as I live on a nearby property, to watch the progress of Midsummer Night Meadows and take note of the quick, lush growth of the vegetables and the new structures and innovations that add interest to the property. On a balmy midsummer night in Texas, it truly is an enchanting sight to see.