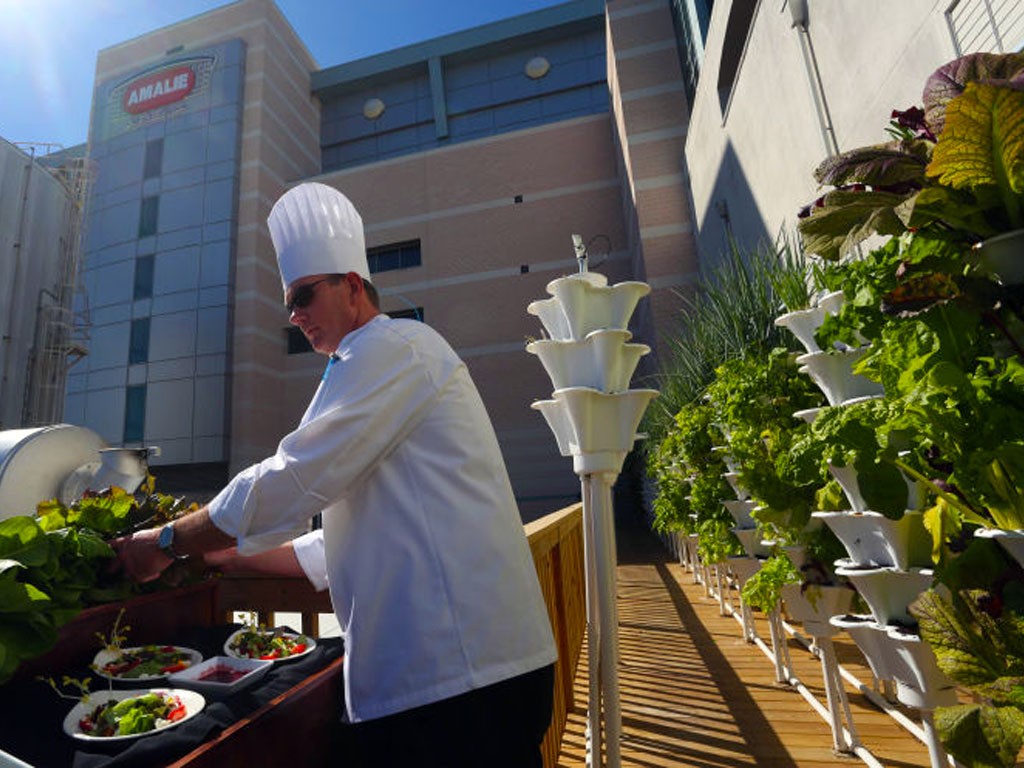 An EzGro Garden At Amalie Arena

What types of food do you eat while watching an ice hockey game at a stadium?  For most people, the answer would be pizza, chicken wings and beer.  A hockey stadium in Tampa, Florida has changed this norm to include fresh produce on the menu for both hockey players and fans alike.

Amalie Arena, home to the Tampa Bay Lightening, partnered with Urban Oasis (an official EzGro Garden distributor) and Delaware North (their foodservice company) to construct a beautiful hydroponic tower garden on site.  They built a deck in a back area that had previously been home to cooling equipment and recycling bins.  This large EzGro tower garden was constructed in the summer of 2014, and has been producing loads of fresh food ever since.  It has also contributed to the arena’s sustainability initiatives.

The horizontal growing space on the deck is just 80-feet by 14-feet, but growing vertically means that this space is equivalent to one acre of farmland.  That’s right, in just over 1100 square feet, the Amalie Arena is able to grow the same amount of food vertically, that would require an entire acre of horizontal land to grow.  There are a total of 125 hydroponic towers, and each tower is stacked with seven EzGro pots.  With 3,000 growing spots, this is the largest commercial hydroponic garden in the Southeastern United States!

Grow-media in the pots consists of a mixture of perlite and coconut coir, providing an optimal combination of water retention and air circulation for roots of food crops.  A 900-gallon tank beneath the deck allows the garden’s irrigation to be recirculating.  Reusing nutrient-rich water to irrigate plants uses 90% less water than a typical drain-to-waste soil garden.  The recirculating system cuts down on labor, too, as the tank only needs to be refilled every 10 days or so.  Towers are neatly arranged in two long rows, with several feet in between for space to harvest and tend to the garden.  Chefs are often spotted in the garden harvesting produce and brainstorming ideas for new dishes.

Florida’s unique growing season, which runs from September through May and only slows down during summer months, coincides perfectly with hockey season.  That makes this an ideal growing situation for the warm-weather ice hockey team.  Garden manager Chris Depree says they are growing enough lettuce and herbs to provide food for the entire stadium on a typical day.

Bruce Ground, General Manager of SportService, along with a team of culinary experts, have paved the way for fresh food at the Arena.  Executive chef Rich Mathis is impressed with the quality and taste of the extremely local hydroponic produce, and adds it to salads and entrees all over the arena.

The garden supplies fresh vegetables to Firestick Grill, an upscale buffet restaurant located right inside the arena.  Fresh food from the tower garden is also served in the VIP Chase Club, as well as the arena’s suites.

The garden allows the arena to grow and serve more unique produce that you might not see in the average grocery store, never mind at a hockey stadium.  Butterhead lettuce and mesclun mix are among the leafy greens grown at Amalie Arena, along with several different varieties of tomatoes, cucumbers, and eggplant.  Growing produce on-site ensures quality and freshness, because produce can be harvested when ripe and brought directly inside- no need to transport the produce on refrigerated trucks.  The stadium also saves money on foodservice by growing some of its own food.

The hockey arena has implemented various sustainability initiatives over the past few years, including a large-scale recycling program.  They have also implemented different ways to conserve water and energy in the arena.  The closed-loop EzGro system saves 300,000 gallons of water each year just by recirculating the nutrient solution!

In 2015, Amalie Arena was recognized by VenuesToday for its energy conservation and green programs.  They were honored with the Best Sustainability Initiative.  In early 2015, they were also ranked as one of the top five arenas in the world.

The EzGro Garden at Amalie Arena is a big leap toward making hydroponic farming more mainstream.  The Garden has received press coverage from numerous news outlets, and is setting the stage for green initiatives at stadiums and other public spaces around the globe.