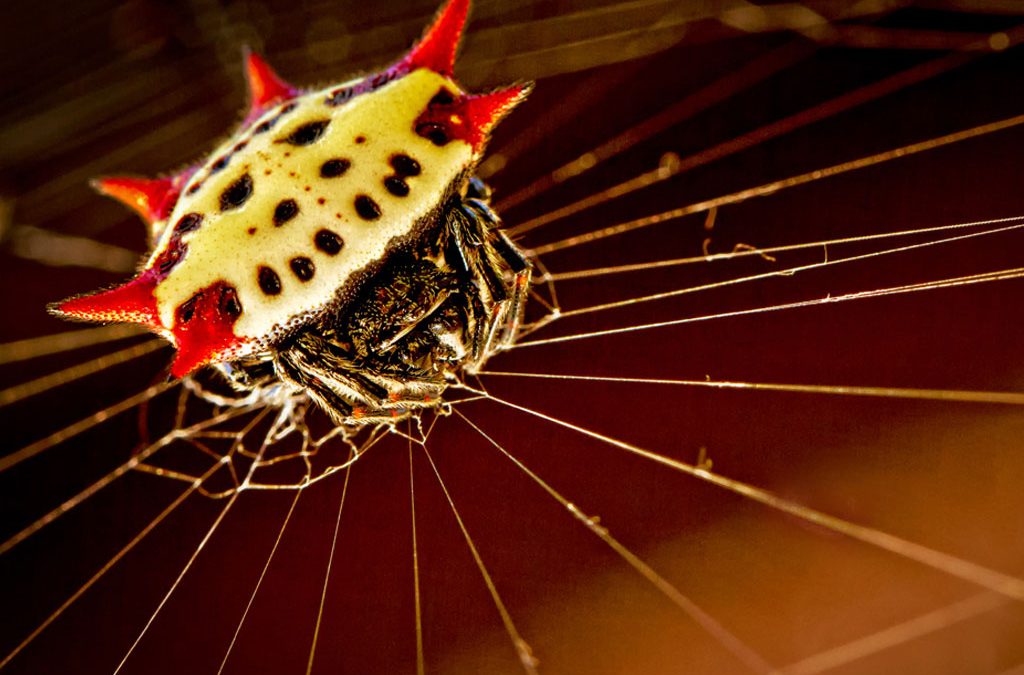 The Spiny orb weaver is one of many species of beneficial spider that feasts on small garden pests.  Their common name is appropriately labelled, the spider has six pointy projections located around its abdomen.  Bright coloration of the abdomen such as yellow, red, white and black are associated with this interesting critter, and the rest of its body is black.

Although they may look dangerous with their bright colors, they are harmless to humans.  Another distinguishing feature is their abdomen, which is broad-shaped and tough to the touch.  They are relatively small; the males are much smaller than females and are more difficult to spot.

The webs of these little predators is quite distinct.  It is flat, round, and usually close to twelve inches in diameter. The carefully constructed web may consist of up to 30 radii, all coming from the central foundation which is made with only one vertical strand.  These structures can be found on the sides of buildings, window corners, and within trees and shrubs.  Some say that these tenacious spiders rebuild their webs every single night to ensure that it is structurally sound.

The life cycle of the Spiny orb weaver is short; males die six days after fertilizing the female’s eggs, and females perish after creating an egg mass.  Their mating ritual is worth noting.  A male pursues a female by visiting her web and tapping on the web’s silk in a 4-beat pattern in order to get her to notice him.  When she acknowledges him, he carefully approaches, hanging on by a thread.  They mate for 30 minutes or more, and the male stays on her web afterwards.

The female creates an egg sac that encases between 100 and 260 eggs.  An egg case is also necessary to provide nourishment for the developing young spiders.  The case is built from silky threads woven together to create a tiny sheet, and it is then covered with a jumble of white and yellow threads. The next layer consists of dark green and yellow threads, presumably for camouflage, and the female attaches it to the bottom of a leaf.  This typically takes place during the winter months.  The female dies after doing all this hard work in order to continue the survival of her species.

Eggs hatch after about twelve days, at which point the tiny spiders stay inside the egg case for several weeks where they learn to move around.  They will venture out into the world once they reach maturity.  At this point they start building small webs from single silky strands.

The spiny orb weaver is not particular about where they take up residence.  They may be found in gardens, woodland edges, fences, and even urban areas.  Webs may even be located near the ground, which makes it difficult for us humans to avoid walking into them.  This spider creates two types of silk, “foundation” silk and “tufted” silk.  The foundation silk is what the spider uses to make the foundation of the web, and it attaches the tufted silk to the web like tiny flags.  Some say the spiders attach these tufts so that birds see it as a warning and avoid flying into their web.

These predators are important to an outdoor garden.  The web is strategically built at an angle so the spider can lounge in the center of the web, waiting for unsuspecting prey.  Their web traps pests such as whiteflies, beetles, mosquitoes and moths, and then the spider moves from the center and paralyzes her prey.  If the insect is small enough to eat, she takes it back to the central point to devour.  If not, she wraps it up to save for later and may take it to a different place on the web.  If multiple insects are trapped at the same time, she may eat them where they lie, after she immobilizes them of course.  After eating the juicy insides of her prey, she tosses the uneaten exoskeleton from her web.

There is no downside to having spiny orb weaver spiders in your garden; they are not dangerous and rarely make their way indoors.  These beneficials should be encouraged in the garden because of their instinctive nature to consume insects that are pests for our crops.  These are just one of a variety of beneficial spiders that help protect garden plants and crops by keeping populations of these insect pests under control.