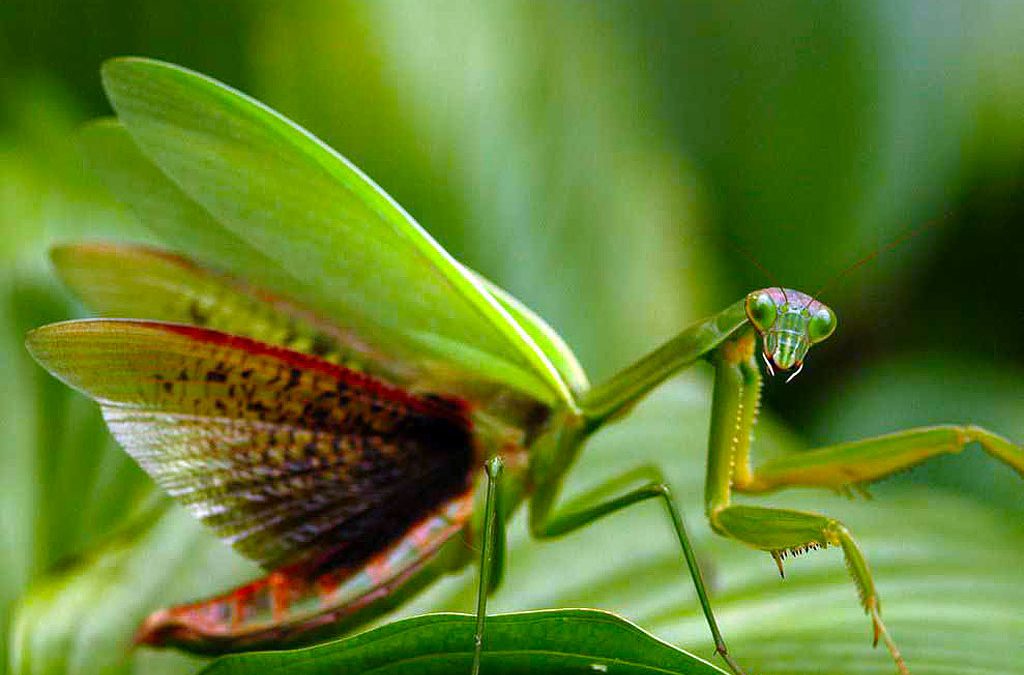 
The preying mantis is almost a perfect insect-hunting machine.  This may be why mantids are one of the first species people think of when the term beneficial insect is mentioned.

A praying mantis starts its life in an egg case as one of up to 300 eggs.  Carolina mantis females wrap their eggs in a frothy secretion that hardens into a foam-like substance. Her egg cases are rectangular, and they are about one inch long by 3/8 of an inch wide, with rounded corners. Coloration of the egg cases range from tan to white on top with darker sides. They can be found on twigs, vines and even under eaves of buildings. Most species protect their eggs this way.

The mantids’ life cycle involves simple metamorphosis; the egg hatches into a nymph, a wingless immature insect that looks like its parents. Nymphs immediately start hunting and eating small game.  They will eat each other if they cannot easily find other prey.

Mature adults usually live from spring to fall, when they begin to mate.  During the mating process, the female bites off the male’s head and eats it.  This bizarre behavior is regularly observed in the laboratory, however, researchers think it is much rarer in the wild. This cannibalistic action could explain why they are territorial loners. A female praying mantis usually dies within a few weeks after copulation.

The mature praying mantis has a number of adaptations that make it an excellent hunter. One example is the mantids’ elongated thorax which acts like a neck.  This is very unusual in the insect world, but it allows the triangular head to turn almost 360 degrees. This feature, along with its two huge compound eyes and three single eyes, gives the praying mantis a great advantage in spotting its prey. A second adaptation is their forelegs.  Each foreleg is adapted to fold back like a pocket knife, with serrated, spiny edges that end with sharp hooks.  This allows the insect to easily catch and hold onto a wriggling insect trying to get away.

Another advantage for the praying mantis is its green to grayish-brown coloring. Not only does its coloring offer excellent camouflage in plant foliage where it prefers to hunt, this color can be somewhat altered by an individual to better match its specific surroundings. The praying mantis will sit back and wait, or very slowly stalk its prey.  Sometimes it will sway back and forth to mimic plants moving in a breeze.  In an instant it will become lightning fast when it captures its unfortunate target.  It immediately uses its strong mouthparts to start chewing its live prey. Sometimes, the mantid will bite its victim on the neck first, thus paralyzing it so it cannot escape. It is the only predator that feeds on moths at night, and is fast enough to catch flies and mosquitoes that venture within its grip.

All of these characteristics combine to make mantids intimidating and almost perfect predators.  One quality that makes them almost perfect predators is that the entire family is unselective in what they eat.  While they do consume pests such as flies, crickets, moths and mosquitoes, they also devour other beneficial insects, including each other. Larger species (especially those in tropical areas) will feast on lizards, small mammals and even hummingbirds.

The preying mantis is one of the components in nature that maintains ecological balance required for responsible, successful gardening, and can be successfully used as a biological control agent. Such use demands careful study, proper identification of pests and predators, and observation of the results of control agent. In addition, the praying mantis is so peculiar that it adds enormous entertainment value when it is introduced to a garden for pest control.