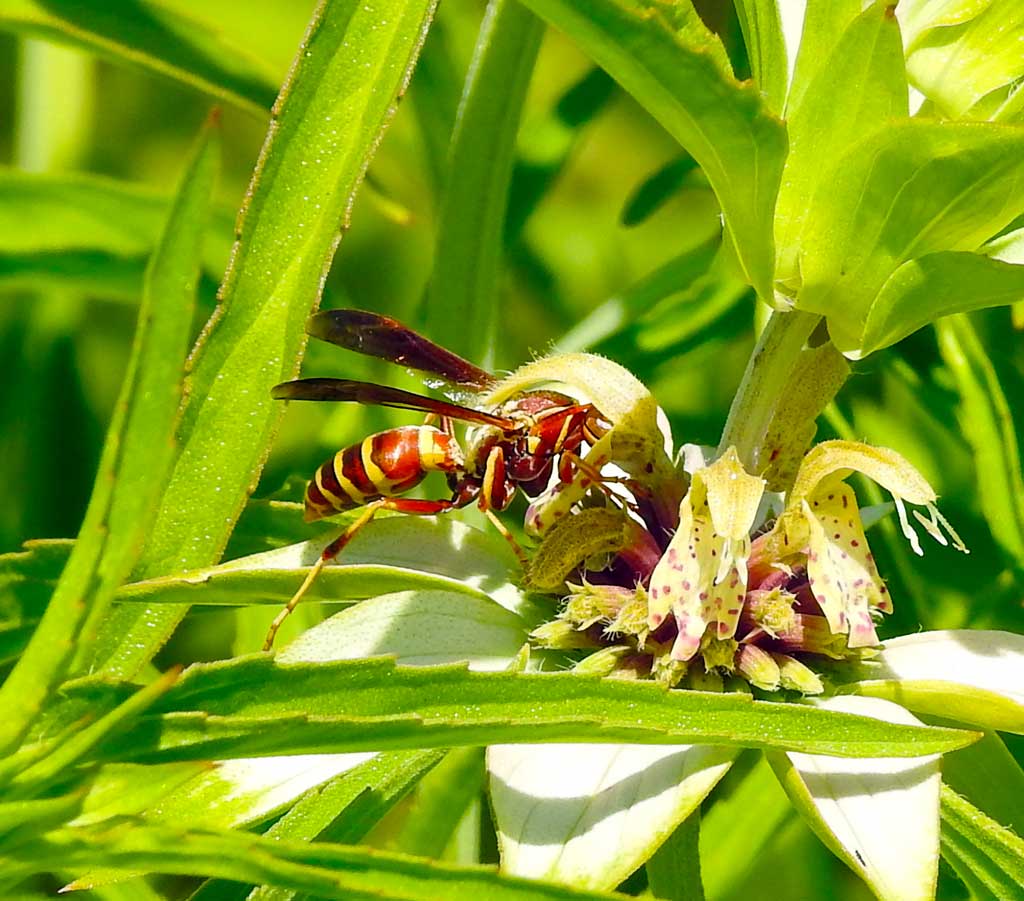 Paper wasps are social insects that build intricate nests from paper fibers and raise their young communally. They may strike fear into the hearts of those who see them, but they are highly beneficial pollinators who skillfully remove young caterpillars from flowers and vegetables to feed their growing young.

Paper wasps, members of the Polistes genus, are in the same group of insects as bees and ants (order Hymenoptera). While some species look very similar to their cousins, the hornets and yellowjackets, they not known to be especially aggressive when unprovoked, and their nests are quite dissimilar in appearance. If you compare the two types of wasps, you would notice the paper wasp has a daintier abdomen with a more tapered waist than the chunkier yellow jackets.

There are many different species of paper wasp: over 200 in the world, and more than 20 in North America ​2​. They vary widely in color and pattern; they can be solid red or black, ombre combinations of red, black, gold, and yellow, or striped. Some species have a large amount of color and pattern variation even among individuals. Polistes fuscatus wasps have unique facial markings that allow them to recognize and remember individuals in their nest ​3​.

In the wild, paper wasps build nests in trees or bushes under heavy cover where they are protected from the elements. Where their habitat overlaps with humans, they will take advantage of the additional safety provided by the walls and eaves of houses. This can cause problems if they are frequently disturbed and feel threatened, but in most cases, even a paper wasp nest in close proximity to a door is not necessarily dangerous to humans! If a paper wasp nest must be removed, the best method is to spray it down with water from a hose from a safe distance. The wasps will abandon the nest and build a new one elsewhere.

To build the nest, the wasps will collect dried fibrous materials, like grasses or tree bark. If their nest is near human dwellings, you may observe a paper wasp collecting wood from fencing. One wasp, the queen, will start the nest in the spring, and her children will continue building the nest with her, feeding and protecting the larvae communally throughout the spring, summer, and fall. When the weather cools and winter approaches, all the wasps die except for newly-minted queens who will abandon the nest, and hibernate through before starting nests of their own the next spring. If the extinct next remains affixed, it may be used as a home for other insects, such as native solitary bees.

Adult wasps are vegetarians like bees, and live a similar lifestyle. They can be seen visiting flowers, nectaries, and feeding on fermented fruits or tree sap. However, while bees evolved so that their larvae could grow on pollen and nectar, wasp larvae require animal protein to develop. As a result, wasps are known for being predators and feeding on other insects and spiders. While this is true, it’s important to keep in mind that they are hunting prey to feed their larvae. The adult wasps themselves are busy feeding on pollen and nectar!

Each type of wasp has a specific type of prey it favors. Paper wasps prefer to feed their larvae caterpillars and grubs (beetle larvae), two common garden pests ​4​. Adult wasps can be observed hunting throughout the garden during the day, crawling over plants looking for caterpillars. Each larva has a ravenous appetite and paper wasps are skilled hunters, so it’s possible that by allowing a single paper wasp nest to stay on your house, you can rid your garden of caterpillars and leaf beetle larvae altogether. The open cells of paper wasp nests make it possible to see the larvae growing. Once they pupate, the adult wasps will cap the cell to protect it until the new adult wasp emerges.

When most people think about wasps, they think about the stinger. Unlike bees, who have barbed stingers and can sting only once before perishing, wasps have smooth stingers and can sting multiple times without any negative consequences. Stingers developed from ovipositors (the tube through which they laid their eggs) in female worker bees and wasps, as a way of defending their nests. While honeybees can live in colonies of tens of thousands of individuals ​5​, an active paper wasp nest has around 30 individuals ​2​. Paper wasp larvae are highly sought-after food for birds, ants, and other animals, and the colony can’t afford to sacrifice the few adults it has to defend the larvae, or else there would be none left to feed them! Paper wasps will not sting unless they feel their nest is threatened, and they do a great service for gardeners—why not let them stay?