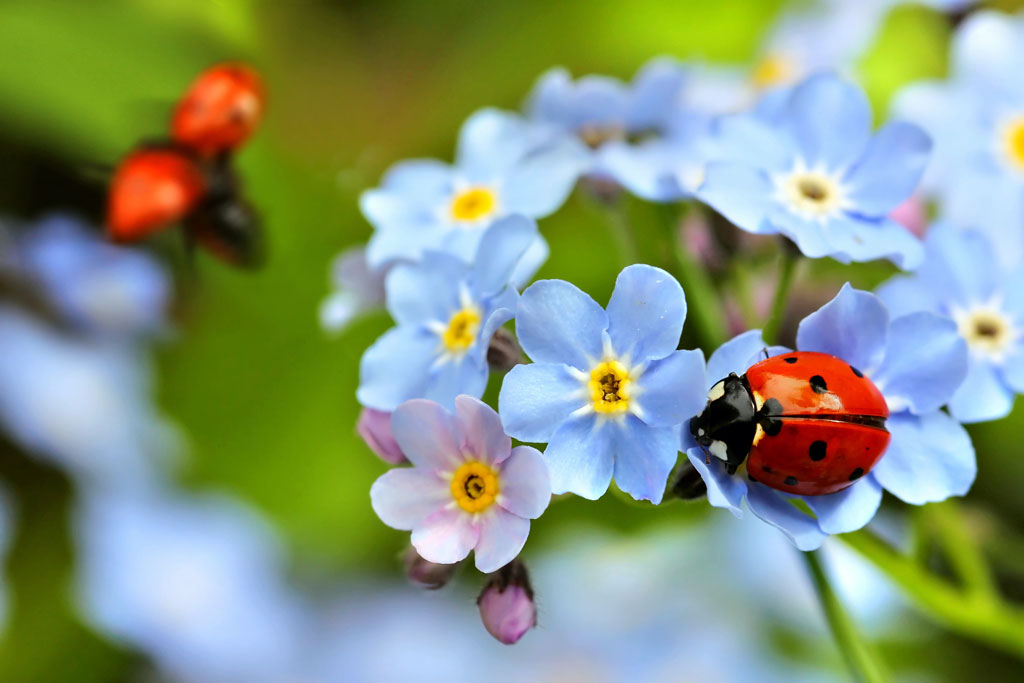 What is it about the tiny Lady Beetle that makes people like them? Is it their bright colors or domed shape? Or do we sense how much good they’ve done us through the centuries? Whatever the attraction, it’s gone on for a long time and is quite widespread.

Many European cultures had a high regard for this beetle family as early as the Middle Ages, when they were dedicated to the Virgin Mary. In fact, their very names in different countries reflect this connection: “God’s Cow” in Russia and Ireland and “Mary’s Hen” in Denmark.

Across northern Europe, there’s a tradition that you’ll have a wish granted if a Lady Beetle lands on you. In Italy, it’s good luck when one flies into your bedroom. Our own children’s rhyme “Ladybug, ladybug, fly away home…” echoes similar rhymes across Europe. Children in Russia ask the beetle to “Fly to the sky and bring back bread.”

Although they’re also called Lady Bugs (as well as Lady Birds and Lady Bird Beetles), the term “bug” is most properly used for the group of insects that classified as the “true bugs” (Order: Hemiptera). Common examples of the “true bugs” in the order Hemiptera include leaf-footed bugs, stink bugs and boxelder bugs. Because “lady bugs” are actually beetles (Order: Coleoptera), the term Lady Beetle is the technically correct reference and is actually recognized as the official common name by the Entomological Society of America .

Lady Beetles belong to the family Coccinelladae and their good reputation is well-earned. Most of the 450 native and introduced North American species are voracious predators of destructive plant-eating insects such as aphids and scales. In fact, their habitat is determined by what they eat.

Lady Beetles can be found on any crop that is susceptible to aphids: vegetables, grains, legumes, strawberries and tree crops. Females even lay their eggs as close as possible to aphid colonies. Lady Beetles will also consume mites, moth and beetle eggs, thrips, pollen and nectar.

Various species of Coccinellidae share many characteristics. Most are dome-shaped and quite small (1mm to 10mm or 0.63/16 to 6.30/16 inch). While color and patterns vary from species to species, most tend to be variations of red, orange, or yellow with black. Some are simply black.

The life cycles are quite similar, too. Most Lady Beetles begin life as one of a small cluster of tiny (1mm or 0.63/16 inch) spindle-shaped cream, yellow, or orange eggs laid in protected sites on stems and leaves. In about a week, the eggs hatch into alligator-like larvae with 3 pairs of prominent legs.

The larvae are often gray or black with yellow or orange bands or spots. After 20-30 days, the larvae pupate, then emerge as adults in another 3-12 days, depending on temperatures and species. Adults may live only a few months to more than one year.

Just how effective are Lady Beetles with pest control? The Convergent Lady Beetle eats its own weight in aphids as a larvae and consumes up to 50 a day as an adult. Its cousin, the Seven-spotted Lady Beetle adult dines on several hundred aphids daily, while the larval form eat may 200-300 as it develops.

The importation of Australian Lady Beetles is one of the first notable demonstrations of pest control by natural enemies in the United States. This species was introduced to help control cottony-cushion scale, another Australian immigrant that was threatening citrus orchards in California. During the late 1970s and early 1980s, the USDA introduced the Asian Multicolored Lady Beetle in the southern and eastern states. These little guys have all but eliminated the pecan aphid in those regions.

As beneficial as Coccinellidae are, the family is not quite perfect. Like most families, they have a couple of closet skeletons. There are two species in the United States that are considered destructive because the adults and larva feed on crop plants: the Mexican bean beetle (Epilachna varivestis) and the squash beetle (Epilachna borealis). Both species are yellowish-orange with black spots.

The other “flaw” of this family as far as biological control is concerned is that Lady Beetles fly. When the food runs out, they migrate to better pastures. Providing alternate food sources, such as nectar and pollen producing plants, in the same area as the target plants may encourage some species to stay put. The family is also attracted to high humidity and to shelter during unfavorable weather and for overwintering.