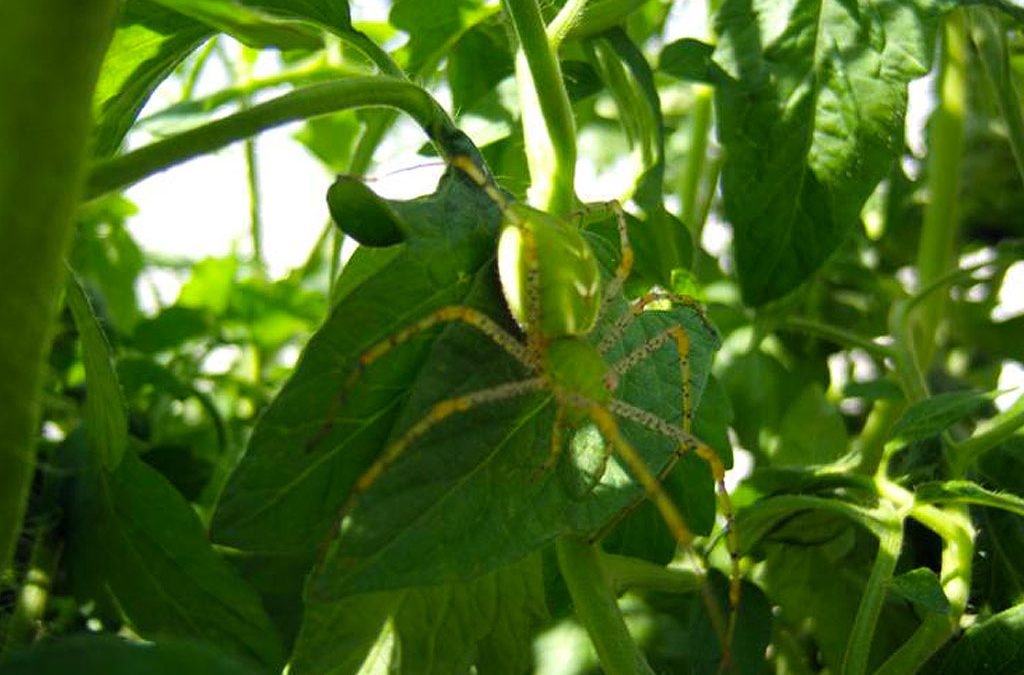 Aptly named for their bright green body color and capability of running very fast, then jumping on its prey like a cat, Peucetia viridans, is North America’s largest ‘Lynx’ spider. These long-legged hunting arachnoids are known by the Spanish name araña (spider) verde (green) or the Latin “viridis” meaning green. Do not confuse them with P. viridana, a species that is only seen in India, or P. viridis, which lives in Spain and Africa.

The female of this impressive spider is about ½ to 5/8 inch in length, with long, spiny legs and an oblong-to-oval abdomen. The male is much smaller and slender, reaching only a half-inch. The two sexes are similar in color and pattern. This attractive spider’s body is a bright transparent green with a relatively clear cuticle.

The oxyopids or ‘Lynx’ spiders can be distinguished from other families by their distinctive hexagonal eye arrangements and the prominent spines on their legs. Their legs also have numerous black spots which are particularly noticeable on the femora (usually the stoutest segment of the spider’s leg; roughly equivalent to the human thigh).

Although their eyesight is not as good as that of jumping spiders, Green ‘Lynx’ Spiders can see their prey up to 4 inches. The carapace (the hard upper ‘shell’ of the front part of a spider’s outer body wall) has red markings. Their eight eyes form a six-sided polygram pattern at the peaked front of the cephalothorax which is also a lime green. (The cephalothorax is first of the two main parts of the body of a spider. This part has the chelicerae with fangs attached, the pair of palps and the four pairs of legs attached to it.)

The very long, thin legs of the Green ‘Lynx’ Spider are a pale green to yellow, with the aforementioned black spines and are covered with numerous black spots, particularly noticeable on the femora. Their greenish abdomen is like a pencil ending in a point with several white and red chevron-shaped markings.

The Green ‘Lynx’ Spider is seen mostly in summer on shrubby vegetation, in gardens and in bushes. This arboreal spider is free ranging and can often be found sitting quietly on the tops of telegraph weeds. They wait for insects in the blooms, or on the pads, of prickly pear cactus, as its bright green color offers ideal camouflage allowing them to blend in with its environment in order to stalk its prey.

They move actively during the daytime hunting small insects, quickly darting and suddenly leaping, over low shrubs and herbs with great agility. They hunt like a cat often lying in wait, slowly approaching and then suddenly pouncing on their prey, hence the name “’Lynx’.” Only true jumping spiders excel their precision. The Green ‘Lynx’ Spider’s relatively keen eyesight is comparable to that of the wolf and fishing spiders.

Although they trail a dragline, even when jumping, the Green ‘Lynx’ Spider do not use a web to capture its prey. They are an very effective—indiscriminate—predators of insects. The Green ‘Lynx’ Spider preys on beneficial bugs like butterflies, honeybees, pollinating flies wasps and other nectaring insects, including many that are larger than itself. Yet, the Green ‘Lynx’ Spider is of interest because of its potential use in agricultural pest management and is considered an important predator of crop-damaging insects such as harmful caterpillars.

Mating occurs while hanging from a strand of silk. Gravid (pregnant) females are able to change the coloration on their abdomens to blend in with green, purple, yellow and white backgrounds. Green ‘Lynx’ Spiders have one generation a year with females constructing one or two egg sacs, in September and October.

The inseminated female does not build webs, nor retreat, but spins a silken egg sac, which is loosely anchored to old vegetation in the upper branches of woody shrubs, blending nicely on plants that have gone to seed. She often constructs protective shelters out of scattered leaves and uses her silk to cover and secure her eggs.

The egg sac is a light green when first constructed but becomes straw colored with age and the thick outer coating has numerous small, pointed spikes all around it. The sac can be from ½ to over an inch in diameter, flattened on one side and rounded on the other, with a maze of silken threads extending from it to nearby leaves and stems. This maze can cover a whole branch in a silken web where the young will remain until they are ready to fend for themselves.

Once the egg sac is attached to the plant, the female either sits right on top of it, with her legs wrapped around it or hangs upside down from the sac. Either way, she guards the egg sac continuously and vigorously, rushing at anything that threatens it. This is common in the spider world.

The female Green ‘Lynx’ Spider shows great parental care, protecting her eggs and later, when the egg sac hatches, guarding her young until the spiderlings can fend for themselves. Each egg sac contains 25 to 600 bright orange eggs, with an average of 200 eggs. The post-embryo remains in the egg sac, requiring 11 to 16 days to hatch.

The first instar spiderling is bright orange, has functional eyes, a digestive tract and spines. After about 2 weeks the young spiderlings emerge. (Spiderlings undergo their first molt inside the egg sac). The female spider helps the young to emerge by tearing open the egg sac. Unlike the wolf spiders, in an emergency, Green ‘Lynx’ Spiderlings can make their own exit holes from the egg sac. They remain near the egg sac for 10 days or more, before dispersing by ballooning. Usually the spiderlings emerge in the fall, catch whatever tiny insects they can and overwinter in protected locations. Green ‘Lynx’ Spiders generally live for only one year.

Peucetia viridans is the only spider that can squirt or spit venom, aside from spitting spiders (Scytodidae). Although Green ‘Lynx’ Spiders aggressively attack its insect prey, they very seldom bite humans. Females can and will bite in defense, especially when guarding egg sacs. However, their bite is generally asymptomatic, only slightly painful, with a little inflammation. They are considered medically harmless.