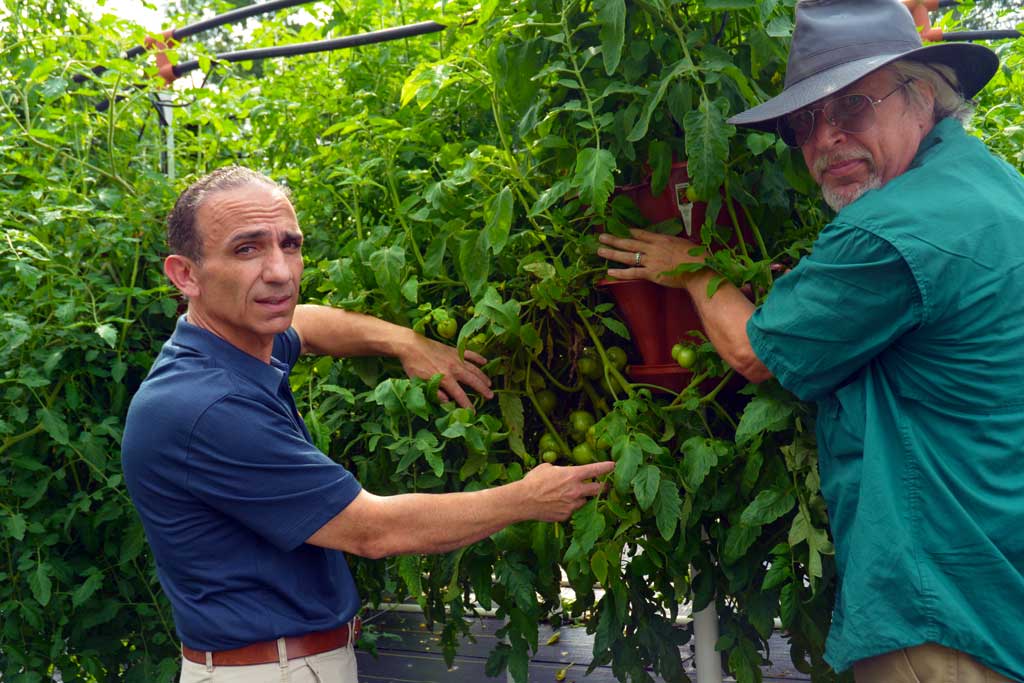 RED ROCK — In an area of Texas known by locals as “East of Weird” because of its proximity to progressive Austin, a farm is yielding many bushels of fruit and vegetables on a space no larger than a parking space.
Being a “computer guy from San Antonio,” now-farmer Larry Johnson says he didn’t know anything about plants – he just wanted to do something outside. Rather than look for a bucolic setting with fertile soil, Johnson found a small acreage southwest of Bastrop and began to design a farm much like he would a software program. As a result, his farm can’t be considered a stretch of land — unless one is looking up.

“We manufacture high-density vertical garden systems,” Johnson said of the EZGro Garden company he founded. “The system is designed to grow 700 plants in 15 towers in a footprint of 2 feet wide by 18 feet long.”
“It’s a closed irrigation system with a nutrient-rich water solution that comes in through the top,” Johnson explained. “Water is pumped from the floor level and comes up inside the towers and then cascades back down through the pots, bringing nutrients back to the tank.”
He said it takes 5 gallons of water about a minute to go from the top pot to the bottom — a speed he says assures that nutrients flow equally through each pot.
But Johnson’s admission that he can “make a system, but I don’t know plants” led him to the computer again – this time to search for a vegetable production expert. He found Texas A&M AgriLife Extension Service’s Dr. Joe Masabni, a vegetable specialist located in College Station, who agreed to evaluate the EZGro Garden system.

“The research we will do, in addition to proving that the system works, will also aim to show growers that a closed system, whereby the water and fertilizer solution recirculates back to the tank, is safe and does work,” Masabni said. “The common misconception is that if one plant is sick all the rest would get sick, because the disease will move in the water and infect everything else. We want to prove that that doesn’t happen. The stock solution is concentrated enough that it will not allow diseases to grow.”
Masabni said he also will study strawberries grown in a vertical system to determine how dense the plantings can be for maximum yields.

“Because the strawberry is a high-value cash crop and because we have such a rich concentration, we want to know if we can grow even denser than what you would think,” Masabni said. “Instead of putting four plants in a pot, let’s put eight plants, for example, and compare that to production from a pot with only one plant.”
He said that as a researcher he can see that the towers of plants are not showing signs of foliage stress, plant stunting or smaller fruit, but “we need numbers to quantify all lists, because the numbers don’t lie.”
If the research shows the effectiveness of the system, Masabni said, he will be able to provide a guidebook for growers who want to use the closed irrigation system vertical towers.
“The beauty of this system is that a grower can have at least 600 plants in a 2-feet by 18-feet space. If this were in a field situation, that number of plants would have been a 300-foot row in length,” he noted. “So, hopefully we can do the math and show growers that it may be a big initial investment in the system, but that is a one-time event. Think how much could be saved in field preparation, in tractor equipment, in plastic cost, and such.”

Johnson’s company already is selling the vertical towers to growers in several countries and to numerous schools where having a growing system in a classroom is desired, or where space is at a premium or limited.
“This particular system is a non-penetrating system, so it just sits on the ground,” Johnson said. “It could be put on a rooftop, a parking lot, indoors or outdoors — just about anywhere to produce food. There’s pretty much no exception what you can grow in these things.”
He noted that his patented design is produced in Texas with mostly recycled or repurposed materials.
Masabni expects his research to take two years. ​1​