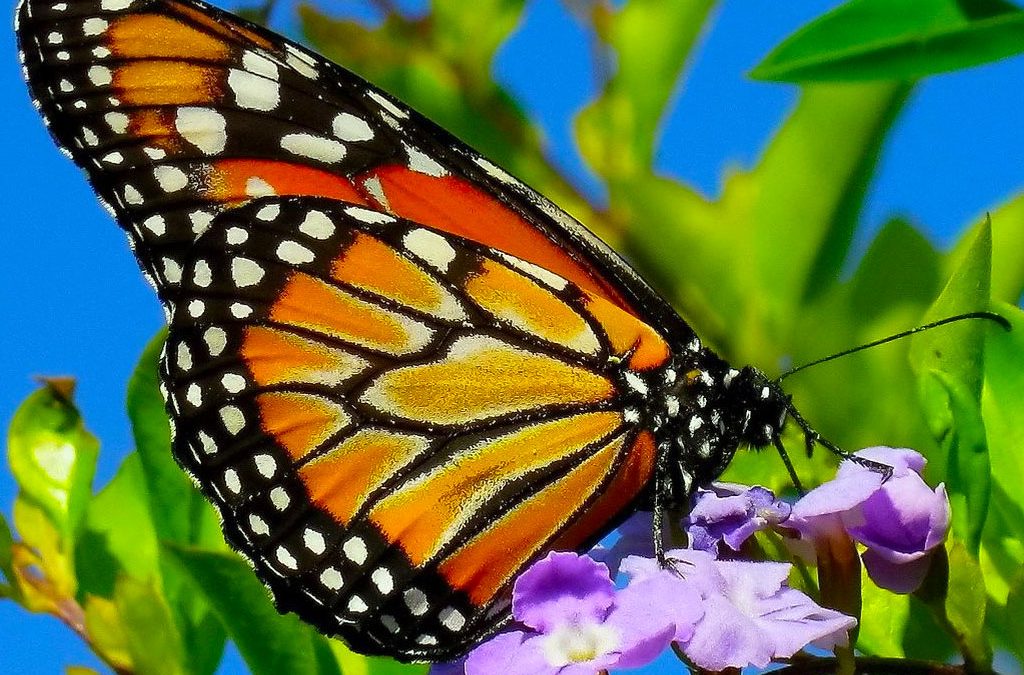 Butterflies are beautiful, graceful creatures and there are over 20,000 different species located in many parts of the world.  They also provide a very important service for the plant kingdom: pollination.  While they perch on a flower to drink the nectar that sustains them, some of the pollen dust sticks on their wings and legs.

As they flutter around, some of the pollen is dropped onto other flowers of the same species.  This is how pollination occurs, and seeds are produced in order to carry on that plant’s genetic code.

Many other animals are pollinators including bees, hummingbirds, and even mammals, but butterflies are some of the most mesmerizing to watch.  There is a tremendous variety among butterflies; they come in all different sizes and are found on almost every continent of the world.  More than seven hundred species of butterflies are found in the United States alone.  They feed on nectar from flowers during the day, and different species of butterfly are attracted to different types of flowers.  They can be attracted to a flower because of its bright colors or scent.

Butterflies are well adapted for pollination.  They use their long tongue, or proboscis, to slurp up nectar from deep inside flowers. Butterflies also have excellent eyesight; they can see a greater wavelength of color than other pollinating insects, and even humans.  For instance, red flowers are typically pollinated by butterflies, because bees cannot see the color red.  Additionally, one study found that the pheromones a species of butterfly produces to lure the opposite sex is similar to the scent of the flowers they are attracted to.  The bright colors associated with these delicate creatures come from the powdery scales located on their wings.  Their bodies are usually slim and the texture is smooth.

The butterfly’s life cycle consists of four stages: egg, larvae (caterpillar), pupa, and adult.  The entire life cycle is completed between two and eight months.  Females can only mate one time in their lives, whereas males can mate several times.  This can cause competition among males.  A female can store sperm until she is ready to lay her 100 or so eggs.  Different species have very different methods of laying eggs.  Some will lay all the eggs in a group on a leaf that provides food for the caterpillar, and others will drop the eggs mid-flight!  Butterflies have taste sensors on their feet which can help a female decide where to lay her eggs.  She is able to detect if a certain plant will make a good meal for her young.  The larvae stay in the pupa, or chrysalis, for 7-10 days before emerging as a butterfly.

There are some marked differences between butterflies and moths, but of course, there are plenty of exceptions.  First, butterflies are usually more colorful than moths.  They display bright shades of blues, oranges, greens, and more.  Butterflies are diurnal while moths are nocturnal.  Finally, butterflies build a pupa without silk, known as a chrysalis, and moths build a cocoon, which is a pupa made from silk.

Just because butterflies have evolved to be attracted to a particular flower species, does not mean the nectar is easy for them to find right after they morph into their adult form from a caterpillar.  They have been observed clumsily fumbling for nectar before they are able to master the slurping technique with their long tongue.

Butterflies have two very important roles in the modern ecosystem. The first is pollination, which is important to all animals including humans, because it allows us to eat.  Fruits, vegetables, and the grasses that sustain the cows we eat are all dependent on pollination.  Their second role is just as important; they are an indicator species.  This means they are very sensitive to changes in the environment, and can indicate the health- or disruption- of a fragile ecosystem.

Their frailty is one reason why butterfly populations are declining worldwide.  The destruction of their migratory pathways by humans is one cause for the decline. Increased pollution in air and soil is not helping either.  Less obvious, the release of non-native butterflies threatens native butterfly populations as well.  There are things that can be done to encourage butterflies populations to flourish.  The first step is reducing the amount of pesticides and herbicides used in your yard.  Butterflies need food and water, just like every other species of animal.  Gardens with butterfly plants can be planted, which add beauty as well as butterfly habitat.  Useful plants such as marigolds, butterfly bush, lavender, and lantana are just some of the many plants butterflies are attracted to.  Education and awareness is of utmost importance in protecting butterflies and other living creatures.  It is with our help that these beautiful insects will continue to be successful pollinators for generations to come.