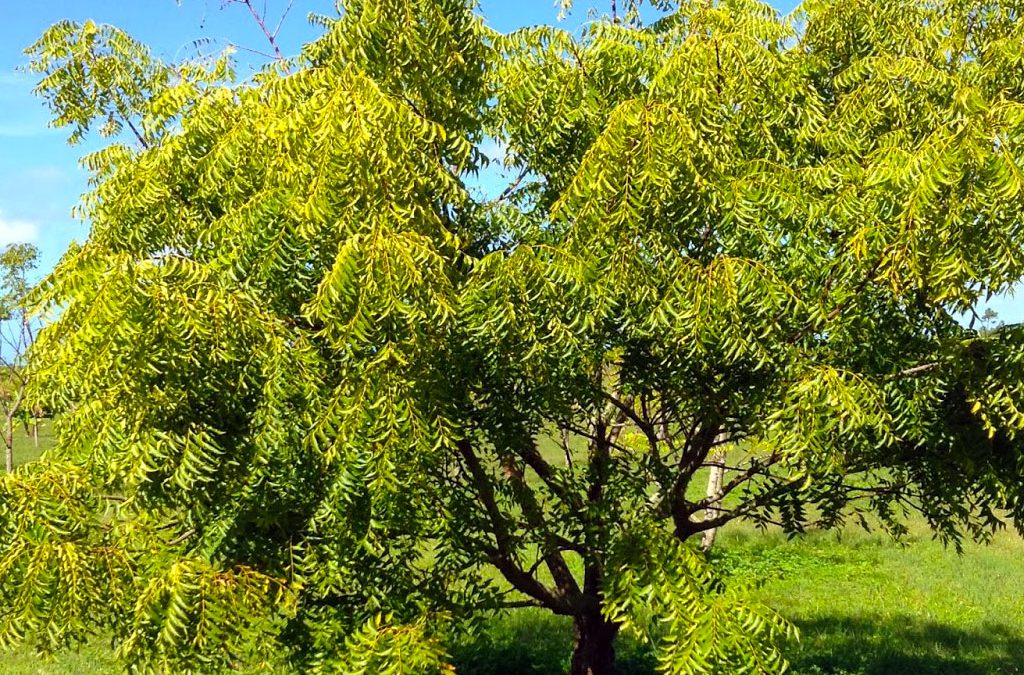 The Neem Tree: A Miracle Plant

Neem is a tropical evergreen tree native to the Indian sub-continent. This tree has a history of growing up to 50 ft. high and has been used for many different purposes for more than 4500 years. The earliest documentation revealed usage of various parts of Neem tree like fruit, leaves, seed oil, roots and bark for their benefits to animals and human beings due to its medicinal properties. Its leaves and extract are well documented as medicine for skin diseases and as the best available tonic for the skin and external subcutaneous tissues. It is popularly known in India as village Dispensary (Medical Clinic). In the first millennium BC it was considered to be the remedy for all sorts of diseases in living beings. As scientists searched in dangerous rainforests and inaccessible areas of the world looking for useful plants, this tree was growing in front yards of houses and colleges, in every town, city and village of south Asia and Africa. It was just the familiarity that left this plants’ miracles/importance hidden until a few scientists took a closer look at this ancient tree. After some observation, they found it extremely important in day to day life for curing all types of illnesses in humans and animals. Since then, Neem tree came to the attention of researchers around the world in order to explore its properties and usage in different areas of interest.

Out of all the plants that have proved useful for humanity, a few are distinguished by their astonishing versatility. Among these, Neem tree (commonly known as Azadirachta Indica) is one of the most important ones found in arid regions of world. From its roots to its spreading crown, the tree contains a plethora of important compounds useful for animals, people and plants. Neem tree’s virtues are, to a large extent, attributable to its chemical constituents.

Different parts of Neem tree and its oil extracted out of seed is being used in different parts of the world for different purposes. Two decades of research has revealed promising results in many disciplines like medicines, cosmetics and agriculture etc. This obscure species may be on the cusp of bringing enormous benefits to countries both poor and rich. Even some of the most cautious researchers are saying that Neem deserves to be called a wonder plant. These days many types of products are being consumed in daily life around the world made out of Neem and it’s by-products. I will discuss briefly the usage and importance of Neem tree in some of the disciplines in the following paragraphs.

Herbal medicines are used for treatment of different types of diseases in all parts of world. Neem tree is an important part of these herbal medicines and is mentioned in many ancient texts dealing with medicines. Traditional Indian medical authorities place it at the pinnacle of their pharma copeia. Due to extraordinary properties of Neem, its bark, leaves, flowers, seed and fruit pulp were and are now used to treat a wide range of diseases and complaints ranging from leprosy, diabetes, ulcers to skin disorders and constipation etc. Scientists from the developed world are working extensively in exploring Neem tree and its properties to formulate new antibiotics. 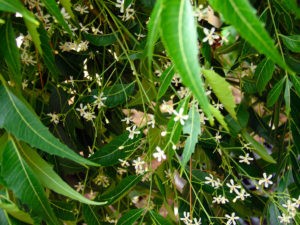 Different parts of Neem tree are being used extensively in manufacturing of soaps, skin creams/lotions, shampoos, toothpastes, beauty aids and toiletries. The Neem twigs are more commonly being used as antiseptic tooth brushes. In most cases Neem oil/extract is being used for making these cosmetics like soaps and tooth pastes etc.

It is in agriculture where most of the scientists focused their research for exploring the benefits of Neem for crop production. Because of those findings, Neem oil, Neem cake, leaves and other parts of Neem tree are being used quite extensively in the agriculture sector in different parts of world. Its main uses in the agriculture sector include being an insecticide in food storage, as soil amendment, fertilizer efficiency enhancer, and very effective foliar pesticide.

In all areas of tropics, much of the harvested food is lost during storage because of worms, beetles and other infestations. People do not prefer to use chemicals insecticides on stored grains in general and more specifically for food stored for their own consumption. For centuries, Neem oil has provided farmers with an effective remedy against such insects. A very light coating of Neem oil protects stored food crops for up to 20 months from all types of infestations with no deterioration or loss of palatability. Neem fresh leaves are also used on small scale for storage of food grain at home quite effectively, but this is being done on a small scale.

Neem cake (after the oil is extracted from the seed kernels, the left over material is called cake) has been used for many centuries throughout Indian sub continent as an effective soil amendment. Farmers of this region have learned through experience that using Neem cake in soil produces larger and healthier plants that have few or no insect/disease problem. Several studies were also conducted by different scientists to find out why plants grew better in soil mixed with Neem cake. Their results revealed that Neem cake is richer in plant available nutrients than manures; it killed damaging nematodes, promoted large population of earth worms, helped keep nitrogen in the soil available for plants and provide significant protection from insects. Farmers of that region have a clear idea that by killing nematodes in soil, a major plant pest is eliminated from soil. Nematodes are very harmful for plants. Nematodes suck juice from roots of plants to the point where they are unable to supply sufficient nutrients to the plant. Then the plants look unhealthy, fail to grow and may eventually die despite sufficient food, water and care.

Use of Neem cake in soil also helps keep soil loose by promoting earthworm activities in soil, which helps in absorption of nutrients and water by plants more easily and efficiently. Neem cake allows plants to develop a strong defense system against these pest attacks by initially protecting plants from insect/pest. Secondly, Neem compounds absorbed through soil enhance these natural defense systems with proven nutritive, antifungal and insect repellent properties of Neem.

Although Neem extract/oil has been under use for centuries for control of insects, the major work on Neem oil and its impact on insects started in 1959. A German Entomologist observed that during a plague of locust in Sudan, the only greenery left untouched despite the devastation by billions of winged locusts was the Indian Neem tree. He noticed that although the locust had landed on the tree and its leaves, they did not feed. The anti-feedant properties of Neem tree, which was well known in India, was the reason. This attracted the attention of the developed world which triggered research on such a powerful tree.

The natural properties of Neem oils pose no danger of toxic reactions in the environment. The seeds and leaves are now the source of a class of pesticide named soft pesticides (Non Toxic and Natural). The main mode of action of Neem oil is anti-feedant. Insects pests usually refuse to eat any plant covered with Neem oil. Its other derivatives include insect repellent and a reducer of an insect ability to reproduce. Its active ingredient, Azadirachtin, is similar to insect hormone (Ecdysones) which have naturally insect growth regulators which then interfere with the molting (shedding and regeneration of outer body layer) and metamorphosis (a process of insect birth). It is natural safe and biodegradable product which is extensively used in various parts of world as insecticide. 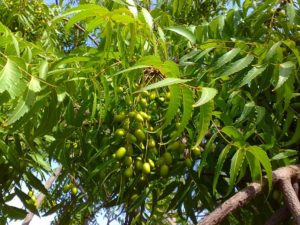 Millions of pounds of synthetic insecticides are being used on residential gardens and lawns and crops every year through out the world. Usually they are quick in action and kill any insect on contact, including the beneficial insects. Although these synthetic insecticides are being used specifically for insects, they can harm any living being who lives or pass through that area where spray is being used for insect killing. Almost all manufacturers of the insecticides have a caution of do not step on grass for at least three days after spray and keep pets, children away from that area. On the other hand, Neem oil is non-toxic to animals and people. Areas sprayed with Neem oil are not poisonous areas to be avoided for days. Only insects that are harmful for plant growth are affected by Neem oil, leaving honey bees and other beneficial insects unharmed. In fact, with the spray of Neem oil the average number and size of earth worms increase in sprayed area compared to unsprayed areas. There is growing awareness among people to use safe and natural products that can serve the purpose without effecting the environment.

Neem oil can also provide protection against fungal diseases. Spray of Neem oil (it has been observed with several experiments) on plants prevent the outbreak of Powdry Mildew disease quite effectively and in some cases better than any commercial product. Its use can also stop the production of Aflatoxin (a very toxic Carcinogenic substance in food grains) by inhibiting the activity of mold to produce this substance. It is considered most effective as a fungi preventive and as a cure after the disease is established on plants.

The plant kingdom is a vast storehouse of biologically active chemicals for pest control. Insects are less likely to develop resistance to this botanical control as their activity is multifaceted. Plant based insecticides are safer to non-target organisms. Neem oil is effective in controlling more than 200 species of insects pests reported by various researchers around the world and no other plant or synthetic substance has such a diverse action on insects. Scientists after studying more than 200 plants exhibiting insecticidal properties reach the consensus that Neem is the most effective and environmental friendly cure for the insects and diseases. At the same time no other tree has received as much attention as Neem in recent past. Its popularity is increasing day by day all over the world where people love to have alternatives to chemical/toxic pesticides. Many scientific institutions and agro industries are trying to make more effective pesticides formulation based on Neem. Use Neem Oil type soft pesticides that can not only serve the purpose but also does not pose any threat to the environment.

Categories: All About Plants